If you are interested in purchasing sheet music, see the 'Store' page, or send Tate an email under the Contact section for the larger pieces.

Prayer (2017) - 2' 30" - This lilting, melodic piece was written during my first year of university. Dedicated to Mrs. Julie Leahy of the Leahy Family from Lakefield, Ontario. This piece, although simple in its beauty, has been premiered by myself during a final concert of the McGill Organ Academy in 2017, which ran as part of the Montreal Organ Festival. The performance took place at St. James United Church, on their large four manual organ, but this piece can be easily played on an two manual organ. This piece has also been performed by friends as far away as Alberta and Australia, usually in a liturgical capacity.

Processional (2018) - 0' 45" - A shorter piece, but not without character, it is a brightly coloured work that would work well as either a bold prelude, or even as a fiery postlude (despite the name).

Postlude (2018) - 2' 00" - This work, with its scherzando tone, it a fun, lively work for the end of service, but also appropriate for concert use. I had written this piece for my own enjoyment, but it was soon performed and recorded by my friend Graeme Shields of Kalamazoo, Michigan, who put it on YouTube (see the "Recordings" page). Graeme performed it with the composer present in a concert at First-St. Andrew's United Church in London, Ontario in October 2018.

Petite Sortie (2018) -  1' 20" - A short work for the end of Mass or a church service, this piece was written for Joe Carere, the organist of the Basilica of Our Lady Immaculate, in Guelph, Ontario. A jubilant and jaunty sortie, it is filled with unexpected chromatic turns and modal moments.

Jubilate Deo (2020) - 4' 45" - A joyful piece appropriate as a prelude or postlude, it is written with toccata-like flourishes and colourful harmonies, and is dedicated to organist and composer Mark D. Himmelman.

Marche Joyeuse (2021) - 2' 00" - A jubilant piece, which would make an excellent postlude for a joyful occasion, characterized by punchy rhythms and colourful harmonies.

Prelude on Slane (2021) - 3' 30" - The well-known Irish hymn tune Slane, typically sung to "Be Thou My Vision," forms the melodic basis of this meditative chorale prelude. Ideal as a soft liturgical prelude or a interlude.

Sortie Solennelle (2021) - 3' 40" - Dedicated to organist Angus Sinclair, this solemn piece would make an excellent postlude. Somewhat march-like, but with energetic outbursts in thirty-second note flourishes breaking up the chordal passages. This piece is a bit dark in character, but driving rhythmic intensity sure to enliven any festive celebration.

Toccata - Exultemus Domino (2021) - 4' 20" - This joyful Toccata was started in 2018, but never finished until being reworked in May 2021. It is characterized by a strong rhythmic drive, and unusual metres, making for a bright and ecstatic composition. It was premiered in June 2021 by Canadian organist Matthew Larkin, in the Ottawa RCCO's Pro Organo recital series. This piece would not have been finished without Matthew's encouragement.

Sursum Corda (2021) - 7' 00" - Commissioned by organist-composer Carson Cooman, organist at Harvard's Memorial Chapel, this slow, meditative piece moves through many chromatic harmonies, with an atmosphere of peace and reverence which makes it fitting for use as a liturgical work.

Introduction, Variations, and Finale on Victimae Paschali Laudes (2021) - 16' 30" - Composed for the Major Research Project (similar to a thesis) of Tate’s master’s degree at York University, this is his largest composition to date. It takes the sequence chant Victimae Paschali Laudes, traditionally sung on Easter Sunday, and varies the melody through nine variations. These are bookended by an Introduction and a bombastic Finale, all of which juxtapose traditional and contemporary elements of music. Recording by concert organist Matthew Larkin on YouTube for Easter Sunday 2022.

Toccata Luminosa (2021) - 4' 30" - This toccata quickly bubbles along from start to finish, with outbursts of bright chords, and hints of J. S. Bach's "Jig Fugue" in the pedals. A challenging work, Toccarta Luminosa would be a joyous conclusion for a recital or an important liturgy.

Lux in Tenebris (2022) - 4' 00" - Commissioned by LAUDEM (L'Association des musiciens liturgiques du Canada) as part of an anthology of new Canadian organ works, this composition exists within a peaceful but melancholic atmosphere, and makes use of the softer stops on the organ. An effective liturgical interlude or prelude, or as a smaller concert work. The title is taken from the first chapter of the Gospel of St. John, heard as the Last Gospel of the Traditional Latin Mass: "et lux in tenebris lucet, et tenebrae eam non comprehenderunt./and the Light shineth in darkness, and the darkness did not comprehend it." Sold by LAUDEM as part of the anthology; contact laudem.canada@gmail.com to purchase a copy.

Four Meditations on Pange Lingua (2022) - 6' 00" - Commissioned by American organist Margaret-Mary Sauppé, the well-known Gregorian chant melody Pange Lingua forms the basis for each of the four meditations. Each section features a different texture and atmosphere, culminating in a broad, chorale-like texture to bring the work to a close.

Pavane (2022) - 4' 30" - Pavane begins softly and continues to build, with the middle being the loudest section, before dying down to end quieter than it began.  The outer sections are lyrical and chorale-like, while the middle consists of a quick, figurative, quasi-contrapuntal texture. Excellent for use as a liturgical prelude.

Gaelic Rhapsody (2018) - String Quintet (with Double Bass) - 4' 30" - This work is based on a haunting, traditional Scottish Gaelic melody, Chì mi na mòrbheanna, which I first heard sung by the Rankin Family in a recording. For years, I have loved this melody, and wanted to do something with it. It wasn't until my second year composition class, in which, for our final project, we were instructed to write a piece inspired by folk music. Given my background with Celtic music, and this melody came to mind. This piece was performed as part of the Student Composer's Concert at Western University on October 22nd, 2018, and was very well received. A recording shall be coming soon.

Fanfare (2018) - for Brass Septet (3 tpt, hn, tbn, bass tbn, tba) - 2' 00" - A bright, festive flourish for a larger brass chamber ensemble, this piece mixes my love for Brucknerian progression and modal turns. This piece is dedicated to French horn player and professor of horn at Western University, Ron George, who was the inspiration for this work. Ron kindly programmed this piece as part of October 2018's "Brass Day" at the Don Wright Faculty of Music in a workshop format. It was well received, and as it was a workshop, I was able to get excellent feedback from the performers on how to improve the piece.

Triptych (2019) - Viola and Piano - 9' 00" - This work features three pieces, titled, Idyll, Scherzetto, and Berceuse. The movements vary in intensity, with the first being more moderate and melancholic, followed by a brisk little scherzo, and ending off with a lyrical lullaby.

Rêverie (2019) - French Horn and Piano - 2' 40" - This charming piece has a floating feeling akin to daydreaming, with lush sonorities and broad melodies. The piano provides a colourful accompaniment, adding to the cloud-like atmosphere.

Viola Sonata (2020) - Viola and Piano - 18' 30" - The Viola Sonata is a work that is a synthesis of Tate's varied musical background. His love for the classical music of 20th-century Britain, as well his own interest in folk music, the roving harmonies of Bruckner, and a predilection for the Church modes are displayed throughout. Dedicated to two of the composer's friends, Elizabeth van't Voort (viola) and Hannah Salamon-Vegh (piano).

Évocation (2020) - English Horn and Piano - 3' 45" - Written in a melodically-driven style, Évocation is composed with a toccata-like opening accompaniment figure reminiscent of raindrops that moves through different episodes before returning to the initial raindrop idea. Special thanks to Mark Pinder for his help with learning about the English horn.

Variations on Nettleton (2021) - Solo Viola - 5' 00" - Variations on "Nettleton" is a composition for solo viola, based on an American hymn tune, which  first appeared in Wyeth's Repository of Sacred Music, Part Second (1813). Commonly sung to, "Come Thou Font of Every Blessing," the melody is treated here with a theme and six variations, each of which further elaborates on the tune. Each new variation takes the hymn in a different direction, ending ultimately with a fiery finale, bringing the work to a close.

Cò am Fear (2018) - String Orchestra - 9' 30" - This work is a series of variations on a traditional Scottish Gaelic song from World War I, titled An Eala Bhàn ("The White Swan"). The song, written by Dòmhnall Ruadh Chorùna in the trenches of the Battle of the Somme addresses his sweetheart back home. This song, with its haunting melody and tragic lyrics, was of great inspiration for me, and never fails to move me when I listen to it. The title of my piece comes from the second verse, translating to "who among men?" Dòmhnall writes in the song, "who among men endures eternally," as he contemplates the mortality all around him.

Fanfara Infuocata (2019) - Orchestra (2.2.2.2.; 4.2.3.1.; timp. plus 2 perc.; harp; and strings) -  2' 15" - This bombastic orchestral fanfare was written after listening to much of American composer Jennifer Higdon's music. While I did not aim to emulate her style, her works gave me lots of food for thought. The idea of a kind of counterpoint of textures within her music was one of the driving inspirations for this piece. This fanfare features modal turns and passing polychordal moments, with brassy outbursts and quieter, lyrical sections.

Ave Verum Corpus (2019) - SSATB a cappella - 3' 15" - Scored in a modal F-sharp minor soundscape for five voices, this choral piece was accidentally written in March of 2019. It was composed while procrastinating, but I didn't expect to write almost the entire work in one sitting. The inspiration for this work was the Conspirato Chamber Choir, in London, Ontario. I was invited to join them for their April concert, and was delighted by the high level of singing and excellent tone in this choir. Revised 2021.

Missa Brevis (2021) - SATB a cappella - 8' 15" - This Missa Brevis is cast in four movements: Kyrie, Gloria, Sanctus & Benedictus, and Agnus Dei. Filled with solemnity, it is composed in a modal F-sharp minor, with hints of Healey Willan and Ralph Vaughan Williams inspiring the piece. Intended for liturgical use, it will also work in a concert setting. 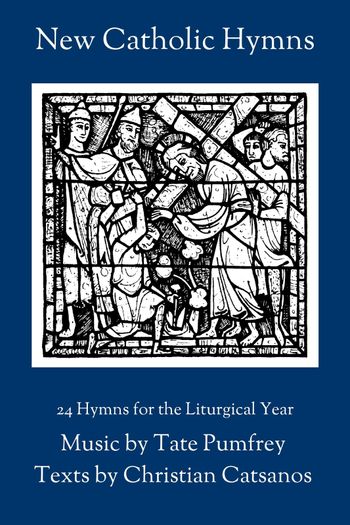 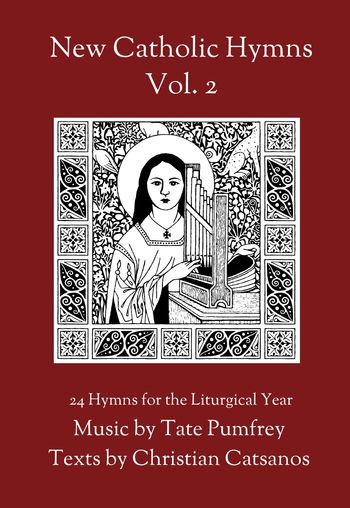 I've been writing hymns with Christian Walter John Catsanos since February 2018. We have written more than 20 hymns for the Church year. They are traditional in style, and harmonized in a standard SATB format. Our booklet is now available on Amazon. (Vol. 1: https://www.amazon.com/dp/1704117453?ref_=pe_3052080_397514860 / Vol. 2: https://www.amazon.ca/New-Catholic-Hymns-Liturgical-Year/dp/B09BM8GCM6/) A review has also been written on my hymns, regarding Vol. 1, found on Catholic Insight. (https://catholicinsight.com/a-traditional-gem-from-a-young-composer-a-review-of-new-catholic-hymns/)